These Are a Few of Our Favourite Things 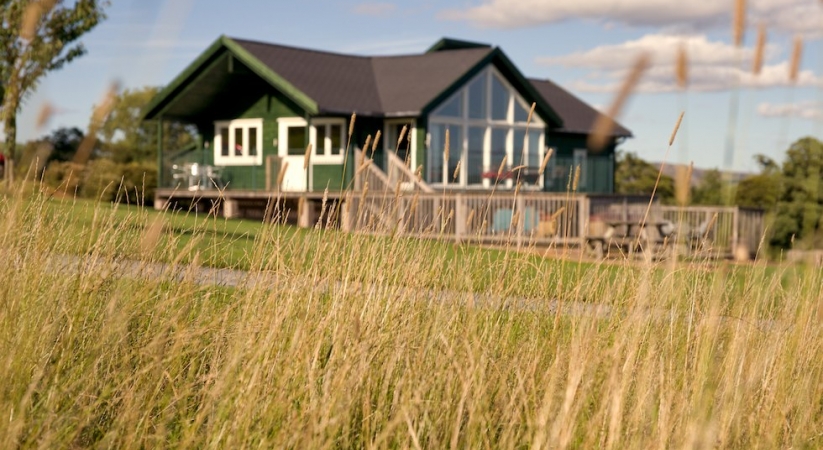 Apart from having a wonderful location high up in the Lammermuir Hills of the Scottish Borders, our location also provides a wonderful base from which to explore the city, coast and countryside. You can be in the centre of Edinburgh in under an hour and the heart of the Borders in just 30 minutes, meaning that exploring some of the finest and most iconic scenery and attractions in Scotland really couldn't be easier. And when you return from exploring, you can relax and enjoy the peace and tranquillity here at Airpods and Airhouses, the best of both worlds can often be an overused description but in our case it is absolutely true.

22-25th June, 2017 at Ingliston Showground, Edinburgh
Celebrating its 177th year, The Royal Highland Show is one of Scotland's most iconic events, showcasing the very best of farming, food and rural life. A great day out for people of all ages, get up close to the country's top quality livestock, taste exceptional food and drink and experience rural living at its most vibrant.

Don't miss Scotland's Larder Live! A showcase of cookery, talks and tastings. The 13th Avenue Arcade which has the finest luxury fashion, arts and crafts and homeware. Record breaking action at The Forestry Arena with the Pole Climbing Championships. And the unmissable Grand Parade.

North Berwick and the Beaches of East Lothian

It's home to an eclectic mix of shops, boutiques, coffee shops, cafes and bars, not to mention world-renowned golf courses such as Muirfield of course. North Berwick offers striking views out to the Firth of Forth and the Bass Rock, the world's largest northern gannet colony. Nearby attractions include the mighty Tantallon Castle to the east and Dirleton Castle to the west. As a seaside town, North Berwick boasts classic fish and chip shops and ice cream parlours.

15-18th June, Harmony Gardens, Melrose
'Where words come to life'. The Borders Book Festival is one of Scotland's premier literary events, attracting famous writers and figures from the worlds of entertainment, politics, sport and just about everything else in between.

The line-up for this year's event is still to be announced, but you can definitely expect a wonderful four days of talks, discussions, food and drink, live music, comedy and much more, all taking place in the National Trust's glorious walled Harmony Gardens in Melrose.

Undoubtedly, one of the most famous streets in the world, The Royal Mile runs through the very heart of Edinburgh's Old Town, connecting Edinburgh Castle which is perched at the very top with the Palace of Holyroodhouse in the shadow of Royal Mile Edinburgh Arthur's Seat at the bottom. The Royal Mile is overlooked by impressive tenements, between which cobbled closes and narrow stairways create a secret underground world.

Peppered with superb attractions such as The Real Mary King's Close or the Scottish Storytelling Centre, historical sites including St Giles' Cathedral and some of the best eating and drinking establishments in the city. For a glimpse of recent history, be sure to visit the ultra-modern Scottish Parliament.

Scotland's largest inhabited castle, Floors Castle is the family home of the Duke of Roxburghe. This stunning castle is also home to a wonderful collection of fine art, porcelain, newly restored tapestries, grand rooms and superb views.
The gardens and grounds at Floors are also equally impressive and a delight to explore, combining one of the finest Victorian kitchen gardens in the spectacular Walled Garden with the formal Millennium Garden, the gardens at Floors are a showpiece of seasonal interest and inspired new creations.

Don't miss the chance to see the world's largest equine sculptures up close.

The Kelpies are 30 metre high horse head sculptures are located in new parkland project The Helix just outside Falkirk. The sculptures were designed by sculptor Andy Scott and were completed in October 2013 and form a gateway at the eastern entrance to the Forth and Clyde canal.

The Kelpies are a monument to horse powered heritage across Scotland and have fast become one of the most iconic structures in the country.

The Edinburgh Festival Fringe (simply referred to as The Fringe) is the world's largest arts festival, to give you some idea of this, last years Fringe lasted for 25 days and featured more than 50,000 performances of 3,269 shows in 294 venues! EstablishedEdinburgh from Carlton Hill in 1947 as an alternative to the Edinburgh International Festival, it takes place annually in Edinburgh each August.

The shows include theatre, comedy, dance, cabaret, children's shows, musicals, opera, music, spoken word, exhibitions and events. Comedy is the largest category and the one that has the highest public profile, due in part to the Edinburgh Comedy Awards, which have launched the careers of many household names of British comedy.

Stirling Castle is one of the largest and most important castles in Scotland, both historically and architecturally. The castle sits atop Castle Hill and it is surrounded on three sides by steep cliffs, giving it a strong defensive position.

Before the union with England, Stirling Castle was also one of the most used of the many Scottish royal residences, very much a palace as well as a fortress. Several Scottish Kings and Queens have been crowned at Stirling, including Mary, Queen of Scots, in 1542, and others were born or died there. There have been at least eight sieges of Stirling Castle, including several during the Wars of Scottish Independence, with the last being in 1746, when Bonnie Prince Charlie unsuccessfully tried to take the castle.

Abbotsford House, is the home of Sir Walter Scott. Created almAbbotsford House, Melroseost 200 years ago on the banks of the River Tweed near Melrose, Abbotsford was the culmination of Scott's creative ambitions as a writer.

Explore the historic house and discover a treasure trove of intriguing objects and unusual artefacts which inspired Scott's greatest poems and novels. Learn about Scott's life and achievements, browse the gift shop and dine in the lovely Ochiltrees Restaurant or wander through the beautiful formal gardens and tranquil woodlands.

Eating Out In Edinburgh

Edinburgh has a vibrant and thriving dining scene, and with more restaurants per head than anywhere else in the UK it truly is a foodie's heaven. From Michelin-star restaurants to family bistros, street food and markets, Edinburgh caters to all tastes and budgets.

Some of the finest restaurants in Edinburgh include Timberyard, The Witchery, Kitchin, Dishoom, Castle Terrace, The Gardener's Cottage, L'Escargot Bleu, Rhubarb at the Prestonfield, Mother India and Martin Wishart.
We hope that this list of ideas has given you some inspiration and has whet the appetite for a wonderful break with us, but don't worry we don't expect you to do all of them in one visit!

Come and try our beautiful and quirky Rowan Pod for 2! With private hot tub and BBQ hut it provides the total camping experience with style!